Crossing Off The Rubicon

Rubicon – It’s a new TV show that just started on AMC. AMC is the channel that launched Mad Men. AMC is edgy.

One time, he goes up on the roof just after he’s been really edgy and unbeknown to him there are two guys in another building watching him through really powerful binoculars. Two guys. Watching the roof. In case Will Travers goes up there again. They don’t know why they’re watching him, but it’s important enough that it takes two of them. It’s because he’s edgy.

It’s a silly scene that makes no sense in any world. Even in the crazy crackpot world of super-genius but paranoid encryption analysts. Even in the world of Rubicon.

Don’t believe me? See for yourself, but beware, this scene comes with creepy music:

Rubicon began with a two-hour double episode. I just watched the whole thing. It wasn’t just incomprehensible. It was willfully meaningless. It’s like they were jumping up and down in every scene screaming, “we’re not going to tell you what this means, so there.”

? The set designer of Rubicon certainly does.

? The writers of Rubicon do.

Remember that boring movie that Robert De Niro directed with Matt  Damon about the origins of the intelligence services in the US? You remember how antiseptic and dull it was because everyone had to suppress their emotions the whole time and be suspicious of everyone and never ever tell the truth? The creators of Rubicon may have seen The Good Shepherd

, but they don’t remember it the way I do.

Rubicon is rubbish. Will Travers looks like a cross between teacher Will Schuester from Glee

and Art Garfunkel. It’s very disconcerting. But he sure knows how to wear a sweater. I wonder if that’s significant.

But there is one sweater guy we’re not sure about. Will’s boss. He’s sinister. He seems like he’s Will’s friend because he wears a sweater. But he’s sinister, because it’s a round-neck sweater with nothing underneath. Ugh. 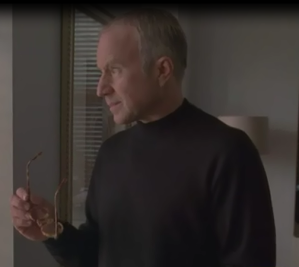 In all my years of watching TV, I can’t remember another show that had so much regard for itself and so little for its audience. When every action is foreshadowing, when every object is a macguffin and when every comment is a clue, plot becomes meaningless.  Rubicon doesn’t have a story. It’s just all a set up for the DVD commentary.

Here’s another scene from the two-part opener. It lasts 45 seconds and features two characters that don’t appear in any other scenes talking obliquely about things which don’t make any sense… yet. If Rubicon weren’t such a tedious and unentertaining show, I would swear that this scene was put in for a joke. It’s pure parody. Either that or it’s an outtake from another unconnected show that a disgruntled editor left in as a prank. You decide:

This entry was posted in Rubicon, TV and tagged glee, Mad Men, rubicon, will travers. Bookmark the permalink.

29 Responses to Crossing Off The Rubicon