Do you ever have that thing where something you are doing with considerable regularity seeps into your subconscious?

During my A-levels I would play a game of chess every night in bed on a pocket chess computer. I wasn’t very good. I didn’t get any better, but I did get a little obsessed. For a while I would see the knight’s move replicated in real life – one up, two to the left – two down, one to the right. The pattern would show up in floor tiles and… well mainly just floor tiles.

I never claimed it was a particularly sophisticated obsession and I’m still not very good at chess.

Then later I discovered Tetris. Stand-up, coin-operated Tetris, not the greyscale Game Boy version. I used to take breaks from the library at university, cash in a fiver buying a Ripple and some Fruit Gums and use the change to play Tetris.

Again, I’m not saying I was any good, but I did start to see those tetraminoes showing up everywhere I looked.

Turns out there’s a name for this kind of thing. It’s called the Tetris effect.

The Tetris effect was identified, anecdotally at least, as early as 1996:

Many people, after playing Tetris for more than an hour straight, report being plagued by after-images of the game for up to days afterwards, an ability to play the game in their head, and a tendency to identify everything in the world as being made of four squares and attempt to determine “where it fits in”.

Oh yeah, I had it bad. Then I stopped playing Tetris. Then it went away.

This is how it went. My friend Jeremy had just called me from the States. He was going to be heading up a new company that handled some kind of unspecified medical procedures. He wanted to make me one of the regional managers along with two other friends. The line wasn’t very clear, so after we hung up I started to send him a dream text. 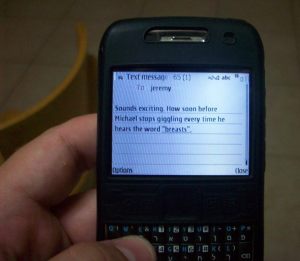 Sounds exciting. How soon before Michael stops giggling every time he hears the words “breasts”?

To be fair I don’t think I made it to the final question mark. I woke up just as I was deciding to go back and place the word “breasts” in quotation marks.

I guess I must have been doing a lot of texting recently for my dream to have been so detailed, but I still woke up feeling like an odd-bod.

All things considered, I would rather I was still seeing tetraminoes.