“The Reveal” Vs “The Trying Out”

When I was young, I would get presents. For birthdays and suchlike. In most instances there are two distinct phases of the present.

The first is “the reveal”. The present is a surprise. You don’t know what it’s going to be. There may be clues such as your relationship with the present-giver or the weight and shape of the present, but the excitement of this phase reaches its peak when the paper is ripped off and the nature of the present is revealed.

Who among us can forget the thrill of getting exactly what you wanted or the nauseating disappointment of not?

After the public spectacle of “the reveal” some people like to withhold “the trying out” until they are alone. “The trying out” can be exquisitely private. A personal moment as you get to know your new thing.

As I get older, there are fewer chances to experience “the reveal”.

But, the upside of adulthood is that we no longer have to wait for others to buy us presents. We can buy ourselves presents. “The reveal” may be redundant, but the treat of “the trying out” never gets stale.

We buy ourselves presents all the time. Books, Music, Clothes, Snacks. We have put aside “the reveal” and learned to ritualize “the trying out”.

Last week I plugged in the iron and fused the apartment. Of course I was upset that I wouldn’t be able to iron, but I was also excited about buying a new iron. I went to the electrical store the following morning as soon as it opened. I browsed the irons on display. I quizzed the sales guy about the differences between the irons.

“Why is that one more expensive than the one next to it?” I said.

I was sold. And it only cost forty percent more than I was intending to spend. 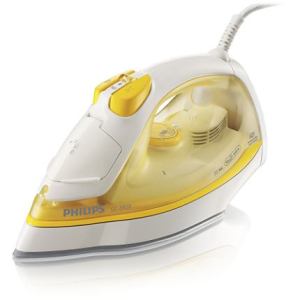 As I drove home I felt a familiar frisson. A frisson I had felt before. It was the frisson that comes before “the trying out”. I parked the car and walked up the stairs to the apartment clutching my gift to myself. It dawned on me that I was excited about “the trying out” of my new iron. My spanking new Philips GC2820.

In my youth, I may have been excited about a new board game or bicycle. I might have squealed with delight over a computer disk or a new pair of trainers. I’m not ashamed to admit that I’ve been thrilled by a well-chosen CD or a much-wanted book.

These days I’m all about the household electrical appliances. I spent most of the morning trying out my new iron. It’s awesome. After I’ve done all the shirts, I’m going to iron out the rest of my life.

This entry was posted in That's Weird! and tagged electrical appliances, gc2820, iron. Bookmark the permalink.

3 Responses to “The Reveal” Vs “The Trying Out”