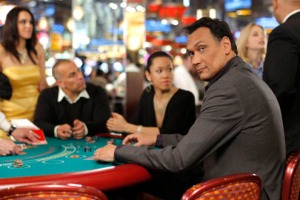 I guess it all comes down to where you stand on Jimmy Smits. Me? I’m ambivalent. Let’s review.

He first showed up in L.A. Law

as a Victor Sifuentes. I didn’t watch much L.A. Law. In the world of Steven Bochco, I was more of a Hill Street Blues

Then Smits had a long run in Nippedy Blue

. He even won a Golden Globe. But, to be honest, I stopped watching after Caruso left so I kinda missed Smits on that show.

and (spoiler alert) was eventually elected PotUS. But by the time he arrived, I had already bailed, giving up roughly when Sorkin did, so I never really saw Smits in that either.

I did see Jimmy Smits in the last two Star Wars movies, but he was pretty bad and not at all like I imagined Princess Leia’s foster dad.

. Fortunately, Prado’s sticky end served as a perfect critical response to Jimmy’s performance on the show.

So now Smits is back. He’s got a new show on NBC called Outlaw. Smits plays Cyrus Garza a Supreme Court Judge with a gambling habit and an eye for the ladies. Looks like the writers have been playing back-story Lotto again. A little bit of this and a little bit of that and people will believe this could be a real character. Except I’m people. I don’t believe.

It’s not spoiling too much to say that in the pilot Cyrus Smits gives up his seat on the Supreme Court to go back to practicing law and helping the people who have been let down by the justice system.

I’m pretty sure there’s never been a show before about a Supreme Court Judge who resigns to go back to being a trial lawyer. Outlaw gets points for originality. On the other hand, I’m pretty sure there has never been a courtroom drama with such a weak and unengaging case and a trial lawyer who has very few courtroom skills beyond knowing all the judges’ first names and the names of their wives.

Smits is supposed to be charming but they give him the clunkiest things to say:

Following the rules, doesn’t always lead to justice. And when that happens, Eddie, you gotta change the rules.

With that level of legal acuity, you can see why he was picked for the Supreme Court.

Outlaw is an out and out dud. Cyrus Garza has to be reckless and erudite. He has to fly by the seat of his pants and have everything worked out in advance. He’s politically incorrect and a bleeding heart liberal. He’s too many contradictions and Smits just isn’t good enough to make him credible.

The only highlight of an otherwise record-breakingly dull supporting cast is Carly Pope as the kooky private investigator Lucinda Pearl.

Lucinda gets all the best lines and uncovers all the clues. She also gets to tease Justice Garza’s uptight clerk, Eddie, with some wholly inappropriate sexual banter.

I’m pretty sure that Lucina crosses the line into actionable sexual harassment in almost every scene she appears. It would be funnier if her role weren’t so utterly demeaning.

. Compare and contrast the two parts to get an idea of how wrong-footed Outlaw is.

Outlaw lacks any of the subtlety, nuance or sexy understatement of the The Good Wife. Carly Pope’s performance suggests she could do better, but the rest of the show is just too broad. It’s as if the writers were typing with mittens on.

I’ve made a compilation of Ms Pope behaving inappropriately. After you watch, imagine the same role being played by a man and tell me if you think it’s still OK.

5 Responses to Down and Outlaw